Best Towns to Celebrate the Fourth of July

Across the country, virtually every city and town in the U.S. holds some type of celebration to commemorate the day the founding fathers told King George and his boys to push off. However, across America, not all Fourth of July celebrations are created equal, and the atmosphere of the small-town festivities usually does the better job at recapturing the American spirit of independence. No matter what part of the country you call home, from sea to shining sea, here are five of the best towns to celebrate the Fourth of July:

Home to the Hall of Fame of America’s pastime, Cooperstown, New York parties all day on the Fourth of July like its 1776. Starting in nearby Springfield, just 11 miles north of Cooperstown on Route 80, the quintessential small-town Annual Fourth-of-July parade begins at 11 a.m. and includes a barbecue and concert. The Cooperstown 4th of July fireworks display is held in the spectacular setting of Lakefront Park on Otsego Lake, a fitting setting for an Independence-Day celebration: During the Revolutionary War, under orders from George Washington, General James Clinton led 5,000 men to Lake Otsego where they built a dam, raising the water level four feet. The rebels then knocked out the dam and surged downriver in 200 boats on the resulting flood tide to Tioga Point to help defeat the British. Before the fireworks start, the Cooperstown Community Band puts on a free concert.

For more than 200 years the small maritime community of Southport, North Carolina has celebrated America’s birth in a big way. The current Fourth of July celebration grew out of colonial times, when ships anchored in the harbor fired off cannons, and now draws over 40,000 people every year. The impressive Cape Fear River serves as a magnificent backdrop for live concerts and a naturalization ceremony that may just move you to tears, with the pledging of new U.S. citizens. If you go for the weekend, a Veterans-Recognition ceremony, honoring the sacrifices of America’s armed-forces personnel, a military-band concert and a reading of our nation’s Constitution are held on the days leading up to the 4th. On the 4th of July, the parade begins at 11 a.m. and fireworks start at 9 p.m. at the Southport Waterfront. A band plays on the Waterfront Stage after the fireworks to conclude the festivities.

Drawing its name from a tall pine tree flagpole made in 1876 to commemorate the nation’s 100th birthday, Flagstaff, Arizona puts on an all-day party to celebrate America’s birth. Flagstaff, Northern Arizona’s largest city, has a laid-back charm with a pedestrian-friendly downtown crammed with historic architecture, a flourishing bicycle culture and musicians playing bluegrass on street corners. The annual Fourth of July parade, with over 100 floats, kicks things off at 9 a.m. “Flagstaff Art in the Park” is a unique arts-and-crafts festival held in Wheeler Park featuring artists from across the Southwest, nonstop live music and a wine garden. An annual concert performed by the Flagstaff Symphony Orchestra is held at the Pepsi Amphitheater at Ft. Tuthill Park, with gates opening at 2 p.m. The “Lights on the Lawn” fireworks display is put on at the Continental Country Club on North Oakmont Dr. at dark. Admission is free for all events. 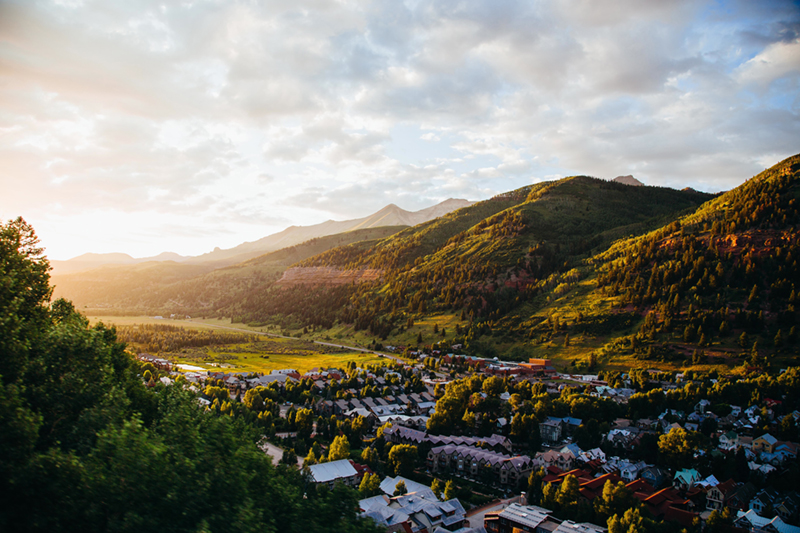 Fourth of July in Telluride, CO is small-town Americana at its best. The Fourth kicks off with the Telluride Foundation’s Rundola foot race, benefiting the Telluride Foundation. After the race, the parade starts at 11 a.m. on Telluride’s historic Main Street with homemade floats, silly costumes, music, airplane flybys by the Colorado National Guard and the Telluride Fire Department puts on their famed barbeque in Town Park. With the setting of the sun over the San Juan Mountains, the town firefighters put on a fireworks display that can be seen from just about anywhere in town. Beside the 4th of July festivities, Telluride is filled with a variety of activities during the summer. The world-renowned Telluride Bluegrass Festival held in June attracts some of the best bluegrass musicians in the world and the prestigious Telluride Film Festival runs over Labor Day Weekend. For the hearty, a hike up to Ajax Peak provides stunning views of the town of Telluride, Bridal Veil Basin, Silver Lake and Imogene Pass.

Photo by Sarah Stierch / CC BY

Another small-town classic celebration, Sonoma, California’s Fourth of July festival is a nationally recognized, 53 year-old tradition, with the colonial-era Sonoma Plaza being center stage for a fun-filled day. A historic little city in the heart of California’s renowned Sonoma Valley wine-making region, Sonoma is known for its plethora of art galleries and 19th-century adobe buildings, including the Sonoma Barracks used by the Mexican military and the Mission San Francisco Solano. Sonoma was the site of the Bear Flag Revolt in 1846, when the Bear Flag Party declared California’s freedom from Mexican rule. Independence-Day festivities start at 9 a.m. with live music, food, drink and game booths. A truly California-sized parade begins at 10 a.m. and fireworks start at dark.

We Let Our Customers Have Their Say

What A Difference A Runway Makes