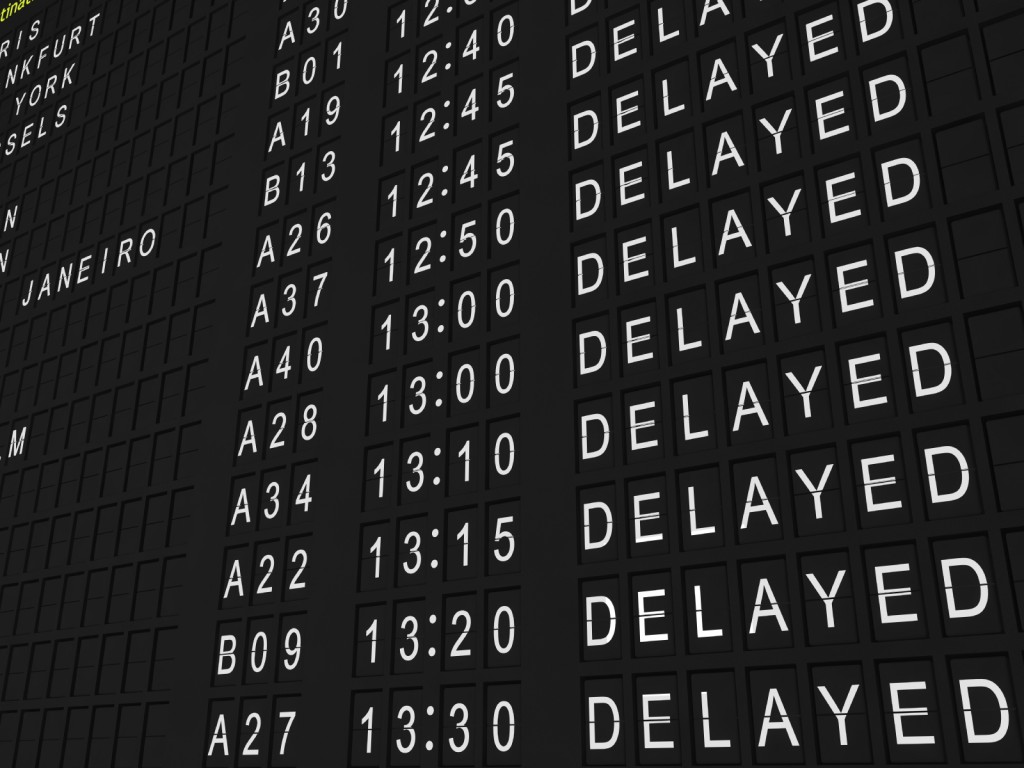 Flight delays rank up at the top of traveler’s worst nightmares. Delays claim the sanity of victims worldwide on a daily basis, but they needn’t be the bane of your existence. If you’re a seasoned traveler, you’ve almost certainly experienced the frustration of a delayed flight and you might have also gotten flight delay compensation. After carefully planning a vacation or business trip, you’ve arrived at the airport early only to find that your flight’s departure will be an hour (or several hours) late. It happens all the time. In fact, it’s so commonplace that an airport’s performance is considered acceptable if only 80 percent of its flights depart on time.

While you can’t control weather patterns or the airline’s tardiness, you can be a savvy traveler and avoid the fear, turmoil, and uncertainty of flight schedules with just a few tips and some preparedness. Read this list of ways to prepare for flight delays before your next trip and you’ll be cool as a cucumber if you get a delay announcement! Fingers crossed you also get flight delay compensation of some sort!

It’s probably little consolation to know that the airlines share your suffering when planes don’t depart on schedule. Flight delays cost the industry billions of dollars each year. For travelers, the cost is both monetary and intangible. Delays can cause you to miss a connecting flight. Subsequently, you may be late for an important meeting, lose a reservation, or miss a family event. You may find yourself calling friends or relatives for help, spending money on alternative forms of travel, or spending the night in an airport while waiting to snag a seat on another flight.

Many factors affect a flight’s arrival and departure schedule. Here are a few of the most common reasons for flight delays.

How to Avoid Flight Delays

Here are seven practical tips to help increase your odds of an on-time departure:

Resources to Help You Predict Delays

Before scheduling a domestic or international flight, check this helpful interactive map of the world’s best and worst airports for flight delays.

FlightStats.com provides historical data for specific flights. Although past trends are no guarantee of a timely flight, they can help you avoid any obvious problems.

Despite your best efforts, there’s always a chance you could end up stuck at the airport if a delay occurs. Be sure to pack medications, medical devices, and necessary personal items in your carry-on luggage or purse so that you can get to them easily. Most airports have restaurants and retail stores, but if you’re not familiar with your flight’s destination facility, pack any special food items you may need. If possible, have a backup travel plan in place in case of a cancellation.

A Little Planning, a Little Luck

There’s no way to completely avoid flight delays. A natural disaster, mechanical failure, or airline mix-up could occur at any time. However, with smart planning and a little flexibility, you can improve your odds of getting to your destination on schedule. Hope for the best, but remember to pack your patience, just in case.

Nobody likes the stress of last-minute changes so try to be as proactive as possible before your trip to minimize chaos. Just in case you have delays or your flight is canceled, have your airline and hotel’s customer service numbers handy. Depending on the delay, you may need to move your hotel and/or car rental reservations, especially if you’re traveling across time zones and will be missing the check-in time. You won’t want to lose a whole week’s worth of reservations for a no-show. As well as having phone numbers loaded on your phone, try to get a few helpful apps downloaded. In addition to downloading some time-killing apps such as fun games, you should also download Hopper, a last-minute flight app that will help you if your flight happens to get canceled. You can usually book another flight quickly and significantly cheaper than if you were to deal with the airline directly.

Buying insurance can also afford you some peace of mind. Check to make sure it’s a good deal before purchasing, but certain insurance plans can keep you from shelling out lots of money to switch flights last minute. Also, before you even leave your house, check the weather conditions for your departure city and your arrival destination. If it’s looking stormy, you may be able to reschedule your flight without a cancellation fee if you still have a few hours before departure time.

And, as mom always says: be prepared. Pack more supplies than you think you’ll need in the event of a flight delay. Ensure that you have enough books to read, games to play, work to catch up on or movies to watch so you won’t be bored if you have to while away a few hours at the airport. You should also pack extra power cables so you’re not sitting there with 2 more hours and only 2% battery life on your phone. And bring plenty of snacks; you do not want to waste your hard-earned vacation spending money on overpriced airport food. And lastly, try to book a flight with carriers that honor the FAA’s Rule 240. This protects passengers in the case of a mechanical issue. The carrier must transfer passengers to another flight if it can provide faster service than waiting for the original plane to be functioning again.

2. When your flight gets delayed

So, you’re sitting in the airport and hear that your flight has been delayed for 3 hours. Fantastic. While you could just wait for your original flight, you could be proactive and look into other options. Most people will rush the service counter, meaning long lines (and more waiting) for you. You can go stand in-line but call the airline directly while you’re waiting. You’ll likely be able to switch flights with a phone rep before you even get to the front of the customer service line. It’ll also make it easier for you to catch the next flight if you only have carry-on bags and don’t have checked luggage to deal with, so keep that in mind when you’re packing.

And if you called your airline and it wasn’t helpful, now’s the time to whip out the Hopper app to see if they offer a better alternative than just waiting it out. If that plan fails and you’re in a dire hurry, can you get creative? Are you able to take the train or an Uber to a different airport? Are there small airports nearby that offer discount flights? Check them out before giving up! And if you can’t beat them, join them! If you’re going to be stuck for a long period of time, see if you can secure your bags via customer service and explore the city for a little while. It’s certainly a more constructive use of time than just waiting in an airport!

3. Do They Owe You Flight Delay Compensation?

Depending on where you’re flying from, the laws of the air are vastly different. Websites such as airhelp.com give you a guide to whether or not you’re eligible for flight delay compensation. As a general rule, if you’re flying within the European Union, your chances of being compensated for your delay are much higher! In the United States, there are few laws that require you to receive flight delay compensation.

Our Customers Know It All