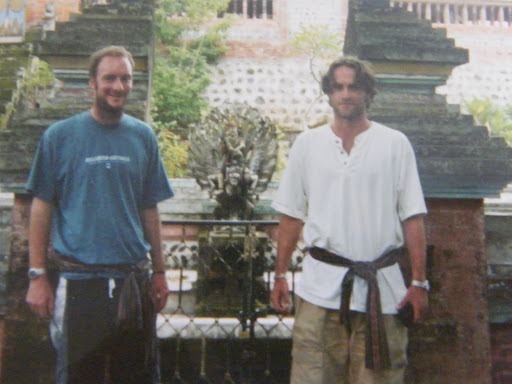 “The world is a book and those who do not travel read only one page.” – St. Augustine

Ever notice the older you get, the happier you are with home, but the more you reminisce about previous travels? Here’s the first in a series of posts on my top 5 travel experiences… Starting with one of the the best and most cherished experiences of my life, and one so inconceivable I’d never be able to recreate it.

I took a backpacking trip through SE Asia and Australia with a friend of mine when I was a long haired and much thinner 22 year old. On a whim, we decided to take a ferry from Bali to the much less trod island of Lombok. We ended up staying for a month and had a blast. We befriended the local kids who enjoyed talking to us, mostly about Manchester Utd and David Beckham. We’d watch the sunset go down on the beach after playing footie with dozens of happy and giggly Indonesian children, then go back to the ‘bar’ next to the neatly constructed bamboo and wicker huts which was home for 4 weeks. A local band played here every night and they loved nothing better than belting out classic rock, to an audience that consisted of just the two of us.

Lombok in rainy season is not much visited by tourists, and this was especially true the month we were there; Just weeks before, Al Qaeda (still largely unknown to westerners) had been blowing up Christian churches throughout Indonesia. 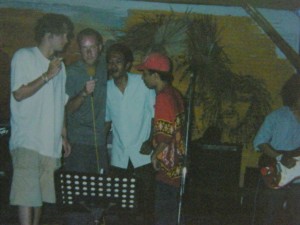 After seeing us rather unfairly chuckling at the lead singer’s hilarious misinterpretation of classic lyrics, the band asked us to come up and show them how it’s done, and so our regular routine of fronting the house band began. We’d have a blast, and when no one felt like playing anymore, it was time to watch the English football on TV (which seemed a strange thing to do  on the other side of the planet from the UK, but as I’d since learn throughout my travels, football is the international language.)

Lombok and many of the islands of Indonesia are staggeringly beautiful. Many are mostly covered in rainforest, have hillsides punctuated regularly with rice paddy terraces, ancient temples, and every now and then, huge volcanoes. The people of Indonesia were all very friendly and cheerful, despite the nation’s internal political and religious conflicts, terrorism, and at the time I was there, a struggling and new democracy. People we met told us about how things were becoming more liberal, although the military and leadership were oppressive and tough on dissenters. As with many emerging countries heavily reliant on tourism, relentless hawkers try to sell you everything from fake Rolexes to ‘good time ladies’. (On Lombok, this wasnt so much a problem as mostly the goods on offer were fish and cigarettes.)

In 2002 on the neighboring and much more well known island of Bali, 202 people died, mostly tourists, in the Sari club where 2 years earlier I’d enjoyed partying with the mostly Australian surfers, students, and backpackers. Despite initially affecting leisure travel to the region, visitor numbers have never been higher. Sadly this is coming at an environmental cost to the beautiful islands, and is also changing the characteristics of many of them (like tiny Lombok) which now receive so many more tourists than when I visited what was then an off the tourist track location. I’m glad I visited when I had the opportunity!

Real and Funny Airport Names from Around the World