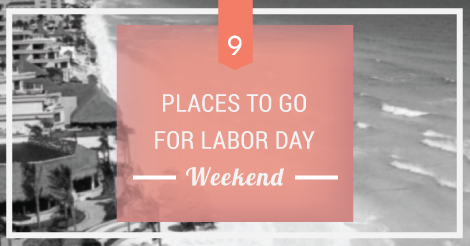 Summer is in its prime and many travelers see Labor Day weekend as the best time to spend their summer break by traveling to someplace new or someplace familiar. Here are the top 9 places to spend a great Labor Day vacation according to top searches for Labor Day destinations.

Famous for its theme parks such as Walt Disney World, Universal Studios, and various water parks, Orlando is one of the most popular places to spend any summer vacation. Resorts located close to Disney World offer great discounts for the Labor Day weekend. All Disney parks, as well as Universal Studios, are devoted to cleanliness and offer a lot of fun attractions such as rides and theaters, as well as various places to eat and shop. If you want to cool off, Disney also has various water parks such as Blizzard Beach.

While the likes of Disney World and Universal bring out the child in everyone, it’s always nice for adults to have their own grown-up fun, and there’s no place like Sin City to enjoy yourself in style. Las Vegas boasts 19 of the 25 largest hotels in the world, with various casinos, buffets, nightclubs, and pool parties. Some of these hotels are themed, such as the Treasure Island hotel, making Las Vegas also suitable for family vacations. For the young ones, Las Vegas also boasts some of the largest video game arcades in America, such as GameWorks.

The first ever Labor Day celebration was held in 1882 in good ol’ New York City. To this day, the Big Apple remains a very popular spot for Labor Day getaways. With a large variety of shops, dining options, museums, Broadway shows, the Empire State Building, the Statue of Liberty, Times Square, the 911 memorial, the new One World Trade Center, and much more, there are limitless options of things to do and places to visit in NYC.

The very capital of the United States is an affordable and patriotic place to spend your Labor Day weekend. Washington, DC offers a lot of places to visit, such as the White House, the Washington Monument, the Vietnam Memorial, and the obvious Smithsonian Museum. All government buildings, including the Smithsonian, are completely free to visit. However, if you want to tour the White House, Senate, or the U.S. Congress galleries, you will need to book them in advance with your state’s Senator or member of Congress.

Some of the best places for Labor Day vacation aren’t located in the States. North of the border, Toronto is one of the hottest Labor Day vacation spots in Canada. Toronto is one of the biggest, most bustling metropolises in Canada, with lots of attractions such as the Harbourfront Centre, where you can watch a free outdoor film screening; underground shopping malls; the CN Tower; ferry rides; and various establishments for food and drinks.

South of the border lies another hot locale for summer vacation as well as spring break. Pristine sand beaches, live music festivals, and beautiful, peaceful beachfront resorts are some of the many attractions the city located in the heart of the Yucatán Peninsula has to offer. If you’re feeling adventurous, you can explore the many Mayan archaeological ruins in the city. And if you wanna end your summer break with a bang, you can have the party of your life with the various nightclubs that Cancún is well known for.

It’s more than just Mardi Gras – the Big Easy is a place where you’re guaranteed to have a good time any time of the year. In the ten years after Hurricane Katrina, the community worked hard to restore the city to its former glory and it really shows. Temperatures may be hotter than most destinations, but flight prices and hotel rates tend to be cheaper for the Labor Day weekend. Whether you want to take a walk down Bourbon Street, enjoy the Big Easy’s signature Cajun cuisine, or catch live jazz music performances, New Orleans delivers on fun times.

Home to Disneyland and the original Universal Studios, as well being only miles from Hollywood, Los Angeles is one of the hottest places to enjoy a getaway on the West Coast. With countless options for all your shopping and dining needs, as well as various events and venues for entertainment, including lots of art and science museums, there’s always something fun to do in LA. And if you wanna catch some waves or rays, there’s the famous Santa Monica beach. Who knows, you may even see someone famous during your stay!

If you want to spend your Labor Day weekend someplace without blistering summer heat, the Windy City is a great place to visit that won’t put too much strain on your budget. Chicago is expected to be about 73 degrees on Labor Day, and offers a lot of events during the holiday weekend. Some notable events include: the Magnificent Mile Shopping Festival, which consists of fashion shows, food booths, and retail discounts; the annual Chicago Jazz Festival, which is always held sometime around Labor Day; and Remix Chicago, an annual gathering focusing on arts and crafts made from recycled goods. Chicago also has notable places to visit, such as Millennium Park and Wrigley Field.

There are many other places to travel to for Labor Day weekend. What are your plans for this three day weekend? I’d love to hear about it in the comments below.

When Traveling from the Atlanta International Airport Choose Off Airport Parking