Many people fear flying. Once you get on an airplane, you are committed to it for the duration of your journey; there’s no pulling over and stopping if you get uncomfortable. This feeling of being trapped would put many passengers on edge even if there were no other reasons for fear. Airplane crashes are a Hollywood staple, though, and they’re usually big, newsworthy events. While airplane crashes are much less common than car accidents, the media attention they receive makes them seem like a real threat to many passengers.

It’s little wonder, then, that airplane turbulence would make so many travelers uneasy. Turbulence can happen without warning, causing a plane to shudder or dip erratically. Items may shift, and passengers might be jostled in their seats. The sudden lift or plummet of an altitude change can cause discomfort in the passengers, and fear is a natural reaction. Fortunately, most cases of turbulence are completely harmless, and there are ways to combat even more serious turbulence to help yourself and your fellow passengers.

What is Flight Turbulence?

Turbulence occurs when an airplane hits a strong wind current. Like a wave in water, these air currents can push or pull the plane. Most commercial jets fly high enough to avoid most wind patterns, but occasional gusts can occur at any altitude. When this happens, the airplane is buffeted by the wind. It may gain or lose altitude, or it may simply shudder under the strain of the cross-winds. 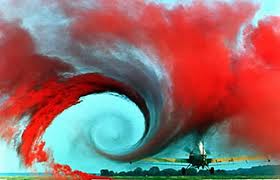 There are several types and causes of air turbulence that an aircraft may encounter. Most of them are referred to as clear air turbulence because they can occur even when there is no visible weather. This makes them difficult to detect, and pilots may not know they’ll occur until they fly into them:

— Thermals: These are caused by the exchange of rising hot air and sinking cooler air.

— Jet streams: Air currents at high altitudes shift rapidly, which can cause disturbances to the nearby air.

— Mountains: Air may behave differently on one side of a mountain than the other; air turbulence is common when crossing a mountain range.

— Wake turbulence: If the airplane passes by another plane or helicopter, the wake created by the other aircraft can cause turbulence.

— Microbursts: Usually caused by passing storms, these downdrafts are sudden and strong. They can also be caused by other aircraft.

If you think of the sky as a giant lake, turbulence makes more sense. Air behaves much like water. It forms currents, swirls, pushes against mountains and recoils from craft that cross it. Just as a ship may be rocked by the passage of another boat, wake turbulence can be created whenever an aircraft passes through a patch of sky. If you think of air as a liquid, understanding the patterns of air turbulence becomes much simpler.

According to the National Transportation Safety Board, turbulence is responsible for 75 percent of all weather-related aircraft crashes. Severe turbulence can structurally damage the airplane and cause the pilot to lose control, which may in turn lead to a crash. Even in airplanes that do not crash, turbulence can still cause accidents. Indeed, it is the primary cause of injury to aircraft passengers and flight attendants.

Recently, a Delta fight attendant sustained injuries when here plane caught severe turbulence before landing in Newark, New Jersey. Another flight on Emirates Airine resulted in injuries for 10 passengers and three members of the flight crew. In both cases, no one who was injured was wearing a seatbelt at the time the turbulence hit.

All the same, turbulence is rarely very serious. Even severe cases of turbulence rarely end in a crash. Pilots are trained to handle clear air turbulence, and they know how to maneuver a plane through even the worst rough patches. Moreover, airplanes are built to be very sturdy and withstand a beating. Even planes that sustain damage will usually continue to fly until the pilot can get them safely on the ground.

How to Handle Flight Turbulence

In all but the most severe turbulence situations, injuries can be avoided by simply wearing your seatbelt and remaining seated during your flight. Nearly every passenger who becomes injured by turbulence sustains those injuries by being thrown about the cabin. Whenever you are seated, be sure to wear your seatbelt even if the flight attendants have said it’s safe to move about the cabin. If you do get up to move around, restrict your movement to necessary routes, like traveling to the bathroom, and pick the nearest lavatory to your seat. Wandering around the airplane stretching your legs can put you at risk from sudden or unexpected turbulence.

Other Tips for Handling Airplane Turbulence:

— Try to get a seat near the center of the plane. Turbulence is felt more keenly in the tail end and is mildest around the wings.

— Be sure to safely stow away your luggage. If you access the overhead compartment for any reason, be sure it latches. Otherwise, the luggage could break free and inure someone.

— Use the restroom before takeoff. This will reduce your odds of needing it during all but the longest of flights. Also avoid diuretics like coffee, tea and soda; opt for plain water or juice instead.

— Be sure your seatbelt fits comfortably. If it’s too small to latch comfortably, ask the flight attendant for an extender.

If you do hit a patch of turbulence, it’s important to keep calm. Practice deep breathing techniques and relax your muscles. Tension can cause soft tissue injuries if you’re jostled around, and it won’t help you deal with a true emergency any more effectively. As long as you remain calm, wear your seatbelt and follow any instructions given by the pilot and attendants, you should be entirely safe while flying.

Despite the fears that many people have about flying, airplanes are one of the safest ways to travel. Constant improvements in airplane design and the way pilots are trained make flying safer every year. It’s okay to be a little nervous, but arming yourself with knowledge can keep you from being afraid the next time you step onto a plane.