An Englishman In New York (for the first time) 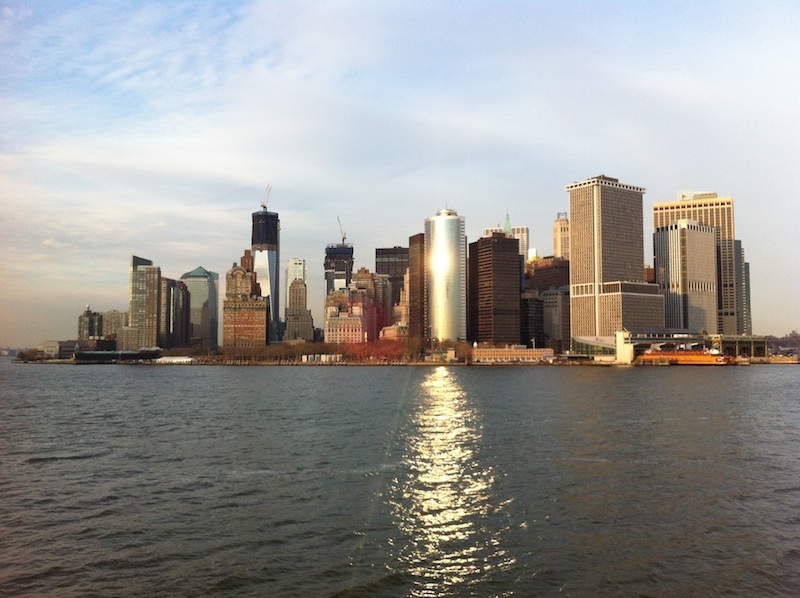 (Ok, I’m actually as much Scottish as English, but I couldn’t resist the post title.)

Visiting New York is one those ‘things to do before you die’ (unless you live in New York of course,) but then you might say the same about Machu Picchu or The Great Wall of China, neither of which would be on my bucket list. That said, I was pleasantly surprised by the Big Apple.

Myself and Lee, the British contingent of AirportParkingReservations.com, flew across the pond to visit some of our colleagues in New York. Heres some of my key observations and favourite things about New York.

We based ourselves in Lower Manhattan, as it’s where Bob Bielecki, New York hipster, art critic and also partner and co-founder of AirportParkingReservations.com resides, at least much of the year, in a rather nice high rise apartment with views to kill for. Much of the iconic imagery of New York is of course based around Lower Manhattan’s skyline – Wall Street, The Brooklyn Bridge, The Woolworth Building and so on, so being based around this area ticks a lot of sightseeing boxes.

It might be a stretch to say the whole of Manhattan is walkable, but with a quick trip on the subway here and there, everywhere is easily accessible. Nothing seems very far away, if only because you can see tall buildings at one end or other of Manhattan almost wherever you are. I was told by locals that the area has changed a lot since 9/11, and I understand a lot of businesses have suffered as a direct result of the 2 most populous office buildings no longer supplying trade to nearby restaurants, bars, and eateries. Nonetheless, there is certainly no lack of choice when it comes to finding a coffee, beer or pizza. (Starbucks lovers would explode with joy in Lower Manhattan).

Being a Brit I almost never see a building more than 5 stories tall, so looking up at vertigo-inducing skyscrapers is always a real thrill. Ironically, what left me with with strongest impression of the entire trip was the absence of 2 very tall buildings…

I’d originally ruled out visiting the site of the original Twin Towers. I felt it might be a bit vulgar, or the product of morbid curiosity, akin to visiting someone’s grave that I didn’t know, but had seen a lot on TV. I also know of many New Yorkers that haven’t even considered visiting the site. For many, it isn’t a cathartic experience, they were there and don’t need to visit the site to feel a connection with the poor souls who lost their lives, many of whom were friends, family, or acquaintances.

Lee and I both felt a pull to just be there, and both felt a bit guilty for it. The Blitz, various Genocides, the Indonesian Tsunami, all claimed many more lives, but the concentration of so many deaths in such a small area and witnessed by millions, including myself, makes standing in the spot where the towers collapsed compelling, almost like a an apologetic, albeit deliberate intrusion.

We were walked around the site and memorial, in the shadow of the enormous and incomplete Freedom Tower, by 2 guides; one a worker who was high in tower 2 when tower 1 was hit. He told his story of confusion and loss, of many friends and colleagues never seen again. What was a revelation to me was that he told of police and security guards sending fleeing workers back up tower 2 because of the danger of falling glass, inadvertently sealing their fate.

The 2nd guide was a fireman who attended the scene and could recall all the many deceased firefighters by name, many of them dear friends. He told of unimaginable horrors and sights that he witnessed, many of which related to the ‘jumpers’, which so disturbed me and so many others who were watching on TV. He also described many unheralded heroic acts of bravery and dedication, so often a forgotten inspirational side of that day.

Politics and curiosity aside, the worst AND best of people lingers thick at the World Trade Center and I’m glad I visited it. The memorial is beautiful, and oddly, respectfully quiet, even with several hundred people milling about and one of the tallest buildings in the world being constructed just yards away.

It’s always strange coming face to face with something or someone you’re so familiar with but never thought you’d see in person. Looking out of Bob’s apartment window, there it is, several miles away, but still enormous and clearly dwarfing everything else at that end of town. And wait – there’s the Chrysler Building too!

The one thing I absolutely had to do on this trip was get to the top of The Empire State Building. Approaching the building from street level, I was struck by the fact it seems to be shrinking. The closer we got, the smaller and less impressive it actually, seemed, which was weird. 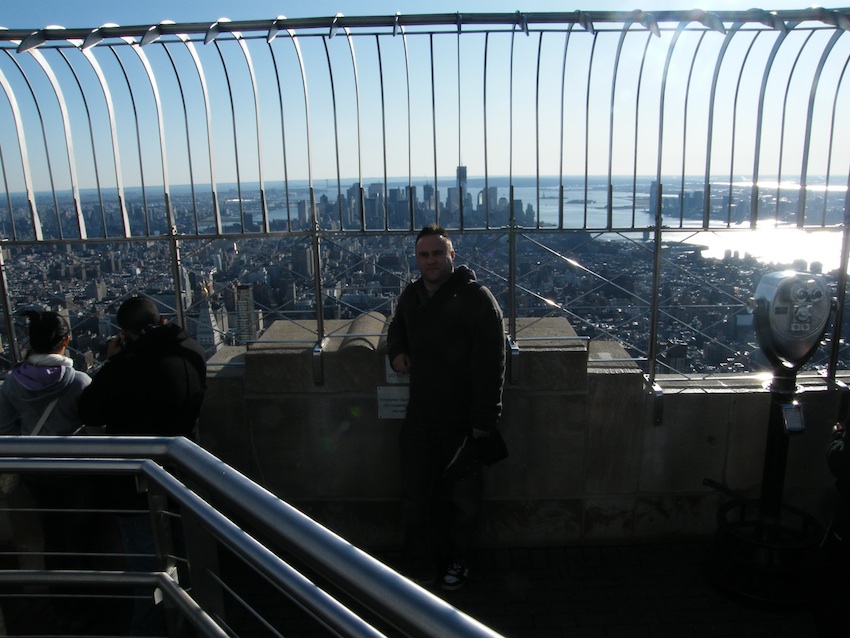 It didn’t take too long to get through security and up to the top – and WOW! There surely can’t be a greater city panorama to be had anywhere. All of Manhattan and beyond is visible at the top. The busy cluster of skyscrapers in Lower Manhattan dominates the south view, with The Statue of Liberty just beyond and at 5+ miles away clearly visible. Looking North, the entire 2.5 mile stretch of Central Park dominates. Madison Square Garden, the neighboring Chrysler Building, Rockefeller Plaza, and so on and so on – it’s all there! If you haven’t been there, do a King Kong and get yourself to the top of The Empire State Building!

By the way – at the top it seems an awful lot taller than it does from street level!

What is it with Irish bars in New York? I’m British, which of course means I need to go to the pub regularly! Having been to the states (West Coast) before, I know that the ‘pub’ doesn’t really exist in your fine country, but that’s ok, I quite enjoy sitting on a bar stool watching sports (even if its basketball) sipping a cold beer. And by the way – hey you guys do Stella now!

Maybe it was coincidence, but almost every watering hole we found was ‘Irish’. Irish being qualified as having the Irish Tricolour adorning the entrance, and having at least one very affable Irishman behind the bar. A roaring fire, oak beams, thatched roof, dart board and every other drinker accompanied by at least 1 mangy dog would make it a little more Irish. Nonetheless these bars do have their charms. Its inconceivable in the UK to have several rounds of drinks before actually paying for them, that’s a nice touch.

New York in 1 week or more specifically Manhattan in 1 week is one hell of a place to visit, and I wish I’d had longer to revisit some of the places above that I really did enjoy. Lower Manhattan is a lot of fun day or night, and I never got bored of gazing up at enormous buildings – Not least the growing tower at the World Trade Center. I really enjoyed that feeling of being somewhere very important and ostentatious, but not in a Las Vegas, in-your-face kind of way; New York does it in rather a center-of-the-universe, anything-you-want-if-you-care-to-find-it kind of way. I wouldn’t want to live there, but as a place to visit, Manhattan has a lot to offer to say the least.