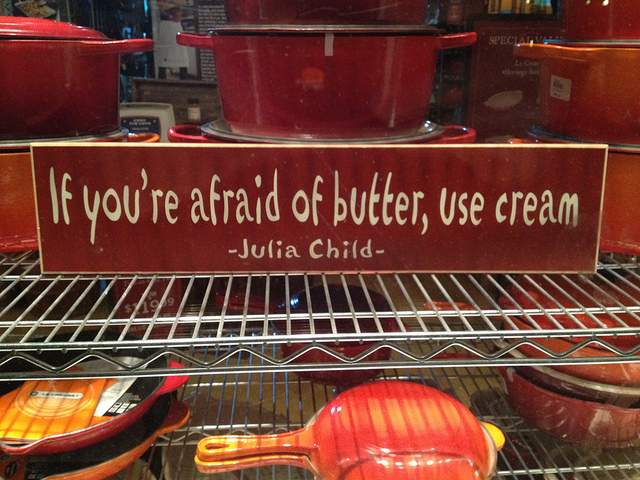 Food is all the rage on television these days, with multiple channels and countless shows devoted to cooking, eating, and just plain ogling. But the original Grand Dame of cooking shows can’t be beat – Julia Child.

She’d be 100 on August 15, and we can’t think of a better reason to celebrate! But you don’t have to bust out a coq au vin to honor her… Here are some ideas for the ambitious, the lazy, and everyone in between.

Special Menus
Chefs all over the country – including, Thomas Keller, Alice Waters, and Emeril Lagasse – have created special menus in Julia’s honor. What’s better than a celebrity chef? A celebrity chef celebrating another celebrity chef!

Movie Night
Watch Meryl Streep (and Amy Adams, but really it’s all about Meryl) in Julie and Julia. If you haven’t seen it, trust me, it’s totally delightful. Can’t commit to a movie? Try this strange-but-awesome video of some of Julia’s best moments, backed up by Guns n’ Roses. We don’t know why, but it works.

Visit Her Kitchen
If you’re near DC, swing by the National Museum of American History, where they’ve moved her kitchen to a new home, opening the new exhibition, “FOOD: Transforming the American Table 1950-2000”.

Like Her on Facebook
Julia’s publisher, Alfred A. Knopf, maintains her Facebook page, and it’s full of news, recipes, pictures, and even a link to her app.

Get Literary
Julia Child first found fame because of her classic cookbook, Mastering the Art of French Cooking.  Next on the list of obvious titles would be the book that inspired the movie… But then we get into the ‘deep tracks’. ‘Dearie’, a wonderful new biography , Julia’s life as political thriller in ‘A Covert Affair’  , and her own look back at her life, ‘My Life in France’. (Extra points if you can find the pre-movie version with the white cover.)

Got other ideas? Got a photo of how you celebrated? Post it here! But most importantly, BON APPETITE!

Holiday Party Planning Tips for The Most Wonderful Time of the Year!