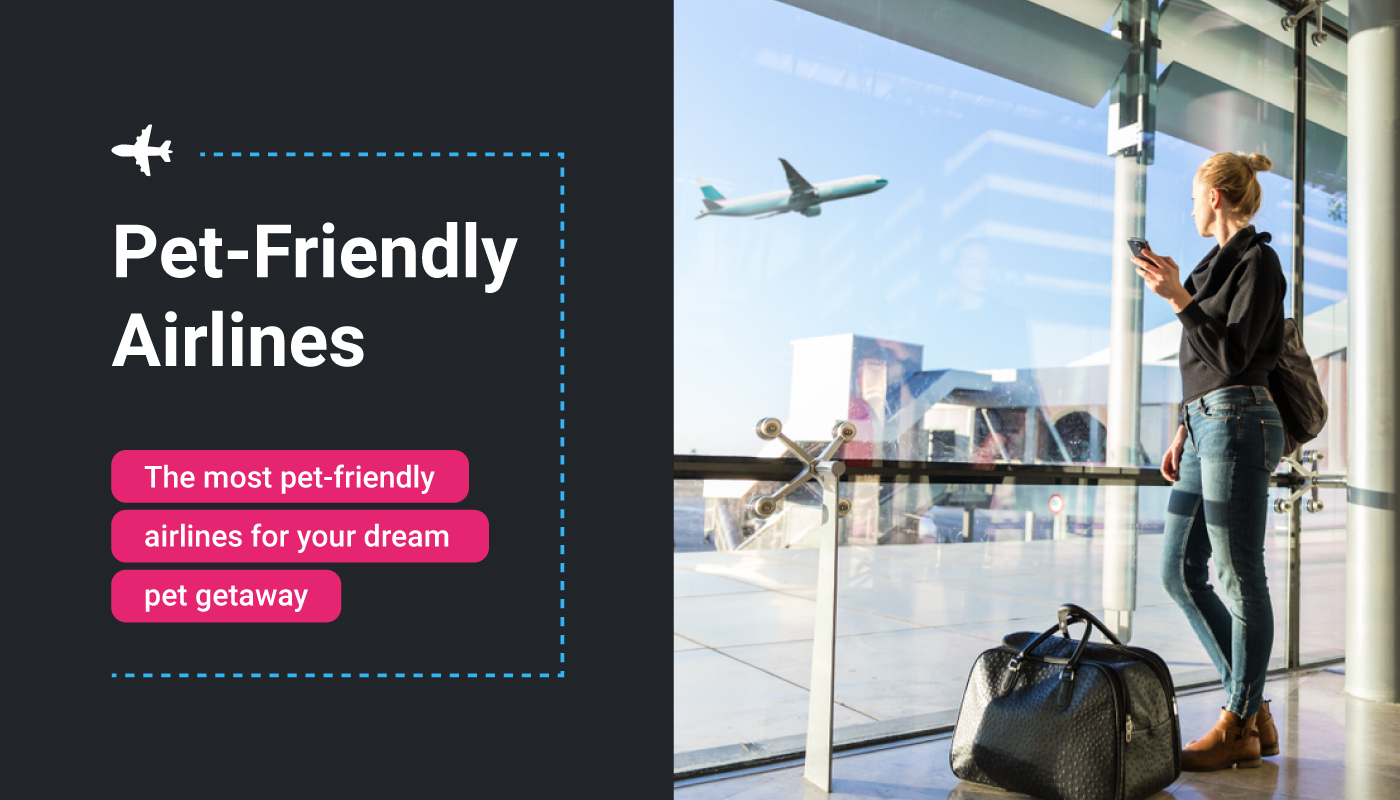 The most pet-friendly airlines for your dream pet getaway

Planning a well-deserved getaway soon, but wanting to take your pet with you? Not sure which airline is the best for your pet or how to go about getting them onboard? Don’t fear, this report reveals the best airlines for pet-friendly travel so you can take off with your favorite furry friend.

When flying from anywhere in the US, be it Chicago or Dallas, you have access to a wide range of major airlines. Many transport pets on their aircraft, but usually, there are significant restrictions. This report uncovers every important detail when it comes to pet travel so you can discover new destinations with your best friend, even if they have fur or feathers.

Factors such as the diversity of pets allowed onboard and the costs of pet transport have been compared for the world’s largest airlines, to reveal the most pet-friendly airlines.

The most pet-friendly airlines 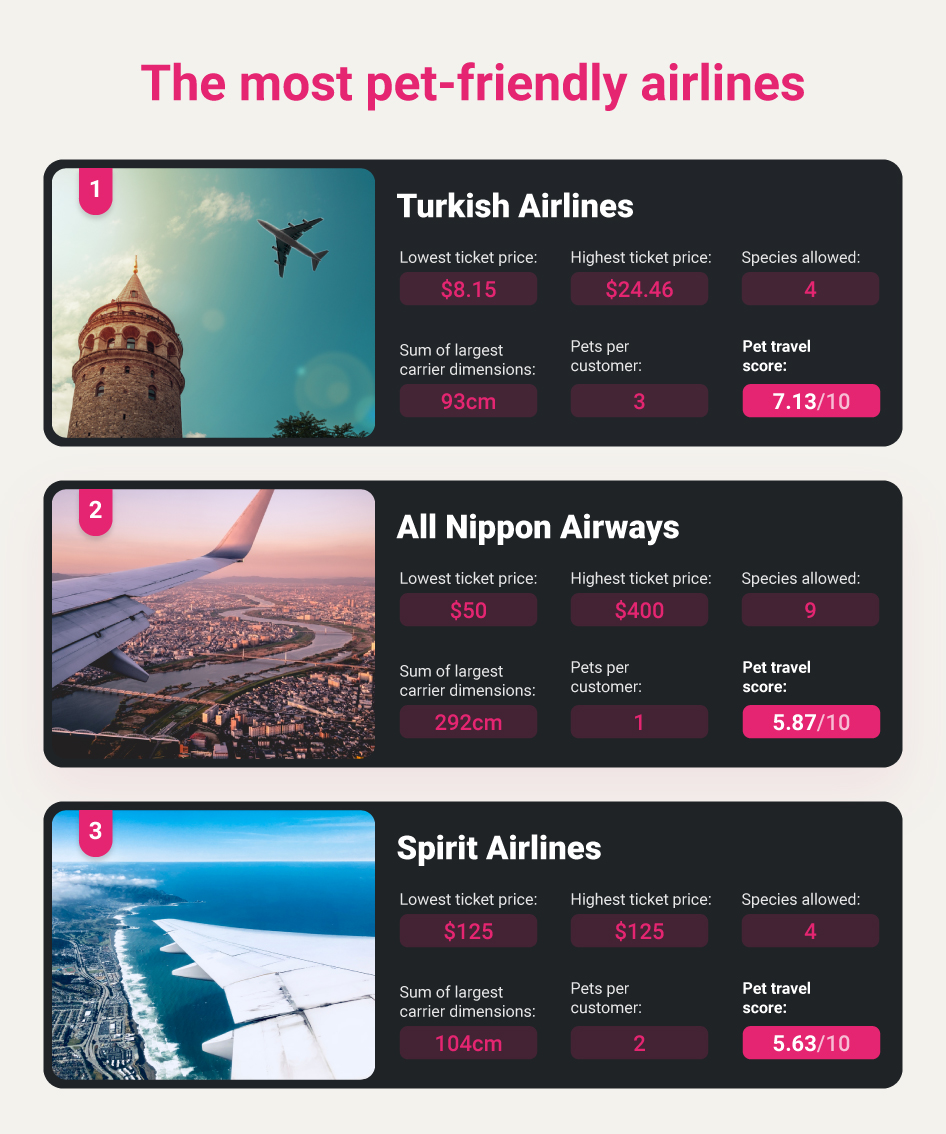 Turkish Airlines rank as the best airline when it comes to pet transportation. Turkish Airlines will transport cats, dogs, ferrets, and small singing birds, at the lowest cost out of all major airlines on this list. Turkish Airlines charges between 150-450 TRY for your pet, equating to $8.15 and $24.46. The catch here is that the carriers for your pet are quite small, with maximum dimensions of 23 x 30 x 40 cm. Therefore, if you need a larger carrier your pet will travel in cargo.

Turkish Airlines’ most popular international route is between two popular coastal cities, Miami, Florida to Tel Aviv, Israel. Pets arriving in Israel from overseas must be accompanied by an official veterinary health certificate.

In runner-up position is All Nippon Airways. Only one pet per passenger is allowed on All Nippon flights, however, All Nippon Airways will carry mammals and birds in cargo, meaning as many as nine different species are accepted. Prices vary, however, the lowest price totals $50 (prices vary depending on the size and weight of your pet). Since all pets travel in cargo, All Nippon Airways offer the largest carriers of these major airlines, with the sum dimensions reaching 292cm.

In third place is Spirit Airlines. Four species of pets are allowed on Spirit Airlines; cats, dogs, rabbits, and birds can all ride alongside you in the cabin. Spirit Airlines likewise charge a standard price of $125 per pet flying on their planes, so you can get a much better feel for how much it will cost you to fly your pet no matter its size. Spirit Airlines allow up to two pets per passenger (provided there is room onboard the plane).

A major ultra-low-cost airline, Spirit Airlines has quickly become a major competitor in the American airline industry. Spirit Airlines offer ​​trips to 77 destinations across the United States, Latin America, and the Caribbean. Fort Lauderdale to Atlanta is Spirit’s top route. 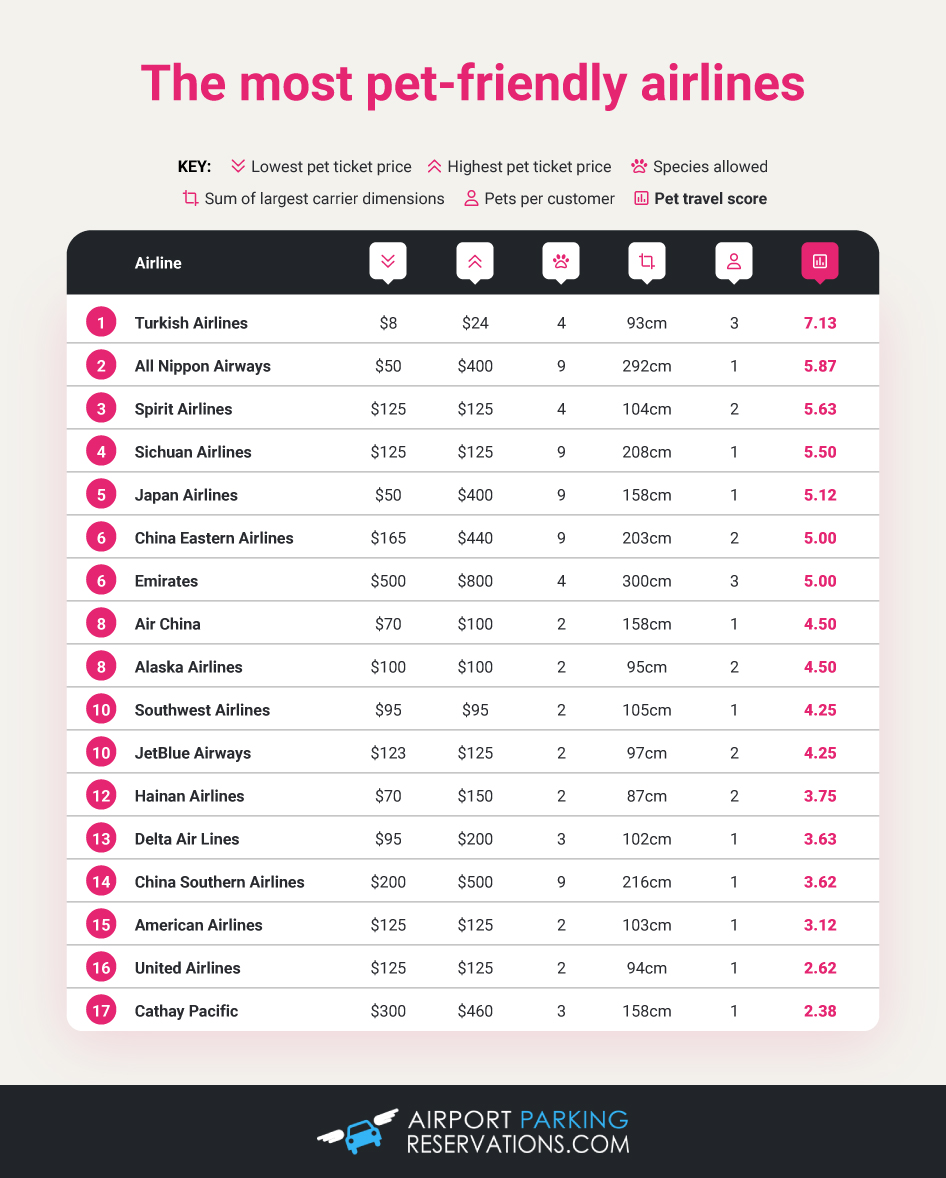 Tips for flying with your pet 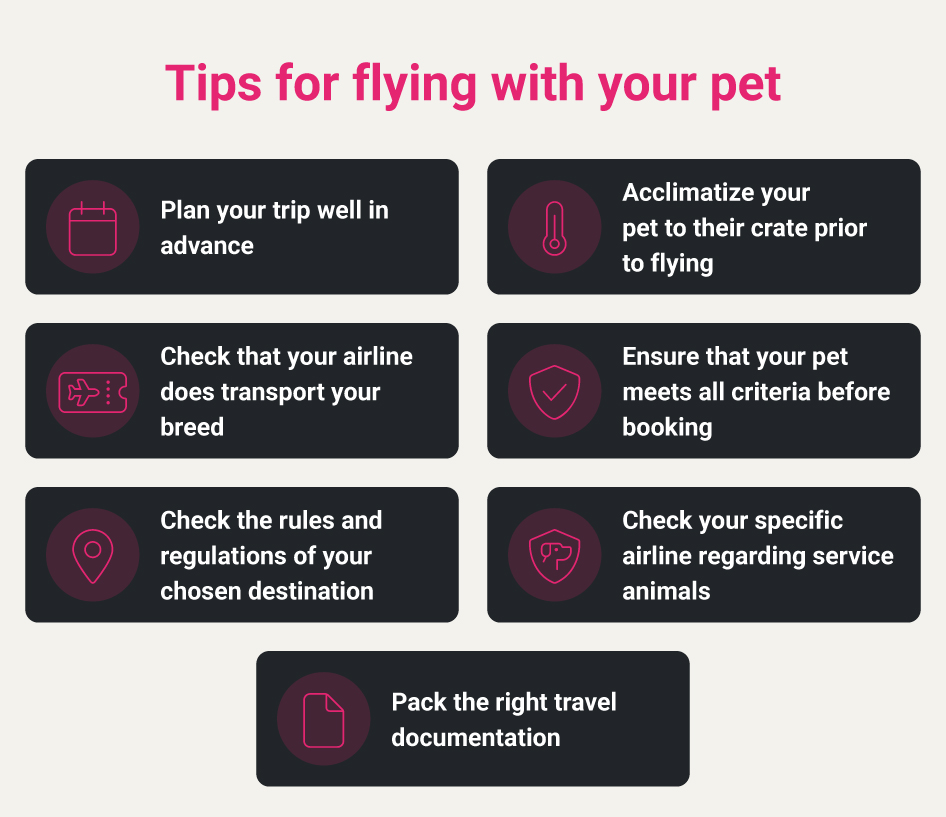 There are rules and regulations you must follow when traveling in the air with your pet, and these will vary from airline to airline. The following information highlights common areas you need to think about when considering buying your pet a plane ticket.

All data was retrieved using each airline’s official website. 21 of the world’s largest airlines were investigated, with four of these reporting that they do not transport animals. The 21 airlines considered are the 17 found in the above table alongside Easyjet, Ryanair, IndiGo, and Xiamen Airlines, all of which do not allow pets aboard flights (other than service animals). The seed list was generated using airportcodes.io and id1.de. Airlines without complete data were not considered.

The lowest and highest ticket prices were taken as the minimum and maximum you can expect to pay for your pet’s ticket on each airline.

The sum of the largest carrier dimensions was calculated by adding up the length, width, and height of the maximum size contained allowed onboard (all in cm).

Species allowed were taken as the total number of different species accepted on each airline. Where airlines accept “​​mammals and birds” or “small dogs and cats and other small household pets”, 9 common small household species were considered: dogs, cats, small birds, rabbits, ferrets, hamsters, marmots, squirrels, and chinchillas. Always consult your airline on what species they allow aboard.

Pets per customer were recorded as the number of pets per passenger allowed on board. In some cases, an extra seat can be purchased for additional pets.

Data from each score was then ranked using a normalized scoring calculation to give each airline a pet travel score out of 10. 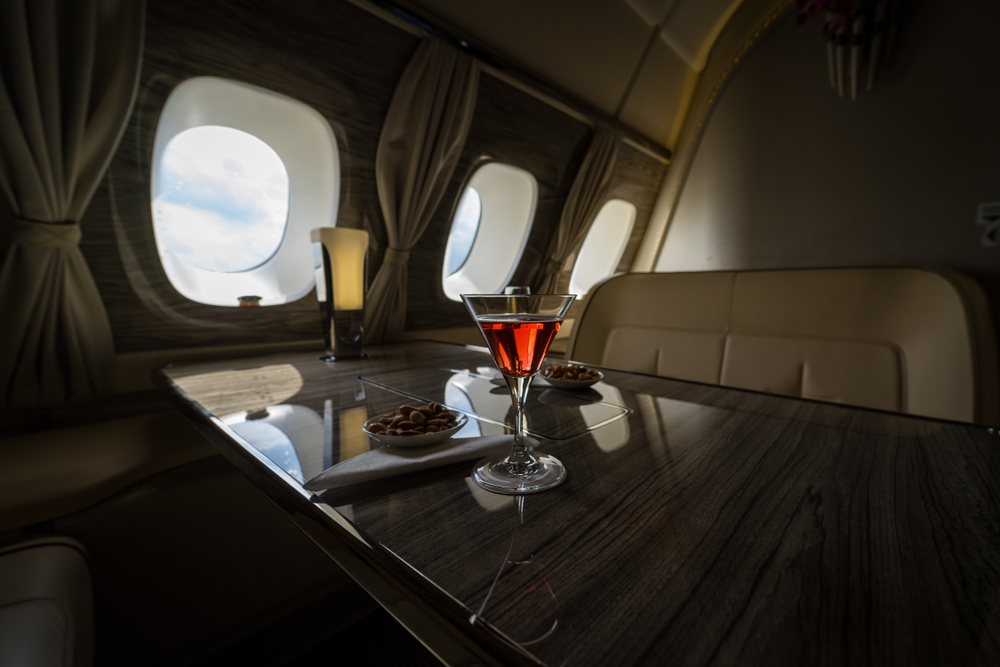 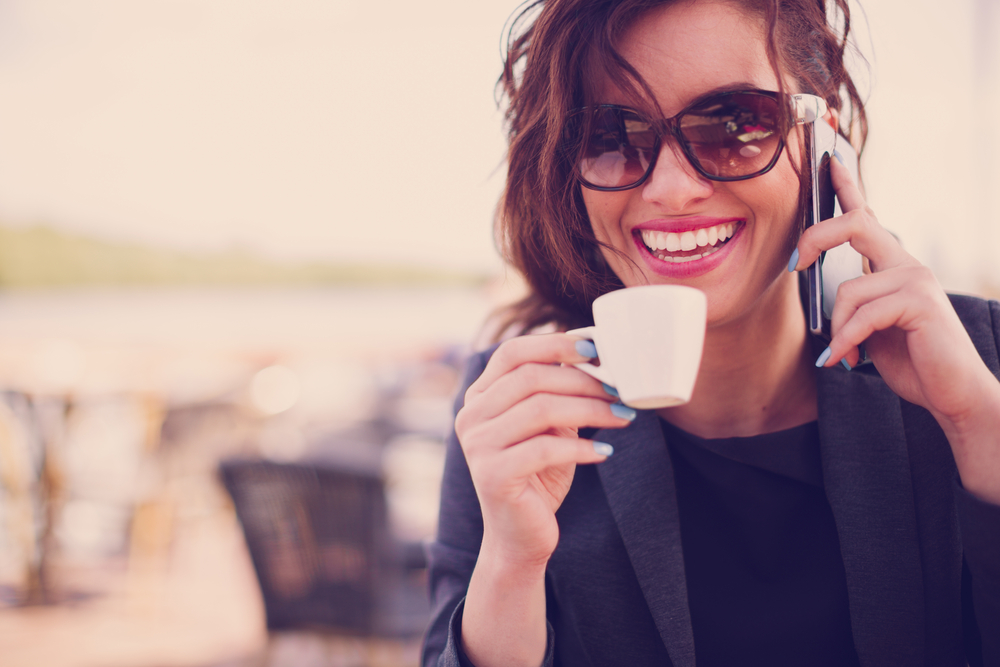 GeoSIM : The New Global SIM Card of Your Dreams

Our Customers Know Us Best